Summer is waning down into a stodgy mess of clouds, rain and damp socks, but at the start of it we were at The Great Escape Festival – Brighton’s most unique, fucking excellent music festival. Incidentally, it was also cloudy and rainy for most of that weekend, too, but with the widest, most diverse range of talented musicians in the seaside city, EVERYDAY WAS SUNNY AWWW.

Rejjie Snow is Ireland’s greatest link to hip-hop since House of Pain graced their album cover with shamrocks and told us to ‘jump around,’ but there’s no need to box him as an ‘Irish rapper.’

To do so would be detrimental, not just to his own sound but to other hip-hop bubbling in cities and countries where mainstream music media doesn’t traditionally recognise the genre. At Snow’s set at The Great Escape festival, he didn’t emerge River Dancing, shillelagh in hand and Irish flute in his mouth. He came out and rapped his mix of heartfelt and hypey lyrics over some lager-in-paper cup-shaking bass and genuinely entertained a semi-passive opening night crowd.

Months earlier, he had packed out Concorde 2, one of the biggest venues in the very same city that he arrived at for TGE. Anecdotes and tales from that night spread around Wagner Hall on Thursday night and one can only imagine what a more Rejjie Snow-literate crowd would have been like during chant-inducing songs like Loveleen off of his breakout release, Rejovich. The less chaotic crowd on this night meant a greater emphasis on Rejjie’s lyrics was present, as well as the challenge of helping a few crowd members graduate from the school of head bopping towards bigger and better things. 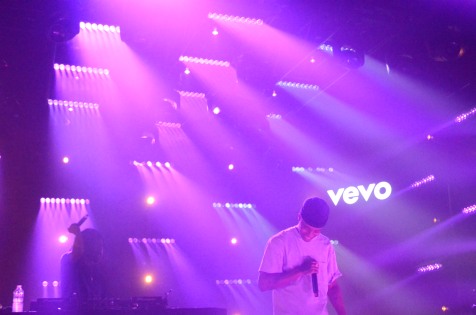 Despite a bassline which genuinely did make beer tremble and the cuffed bottoms of hip Brighton trousers wobble, the Irishman’s bars could more often than not be heard over the top – the eternal challenge of live hip-hop overcome. His nomadic nature across Ireland, England and the USA means a centric fanbase of guys able to rap his lyrics back to him at every live show may take a little longer, but as features on tracks from the likes of Loyle Carner and even more so Joey Bada$$ represent, this is a hip-hop artist carving a worldwide appeal rather than one in the pocket of Brighton which he turned inside out at The Great Escape.

Rejjie Snow is part of a modern hip-hop sound that has looked at mumbling, trap-heavy rappers in the face and slapped them across their colourfully haired head. Anyone reading this is encouraged to check out his freshest release The Moon & You and backtracking to 2013’s Rejovich if you haven’t already. Expect songs that have a sound similar to Odd Future at their possibly underrated best, but with tighter, more complex beats and a knack for creating hooks that you want to sing to on sunny days in your convertible that you don’t own.

There are plenty of tracks between now and 2013 to enjoy though, one of which is Pink Beetle – the song that stuck as the crowd waddled out of the heavily Vevo endorsed venue and onto something else. The track talks a lot about his past, with obvious elements of religion within his verses and the chorus, as well as mentions of his ‘exes’ and ‘crackheads in Dublin city’ – a side of the city less romantic than the one we’re all sold by Guinness. Despite it’s dark content, Blakkst Skn was the juxtaposing, funkiest track on his set list where a guest vocalist came out for the hook. Surely at this point, those timid head-boppers had at least moved onto hip-shaking and maybe onto their first Rejjie Snow EP if they hadn’t found one already.