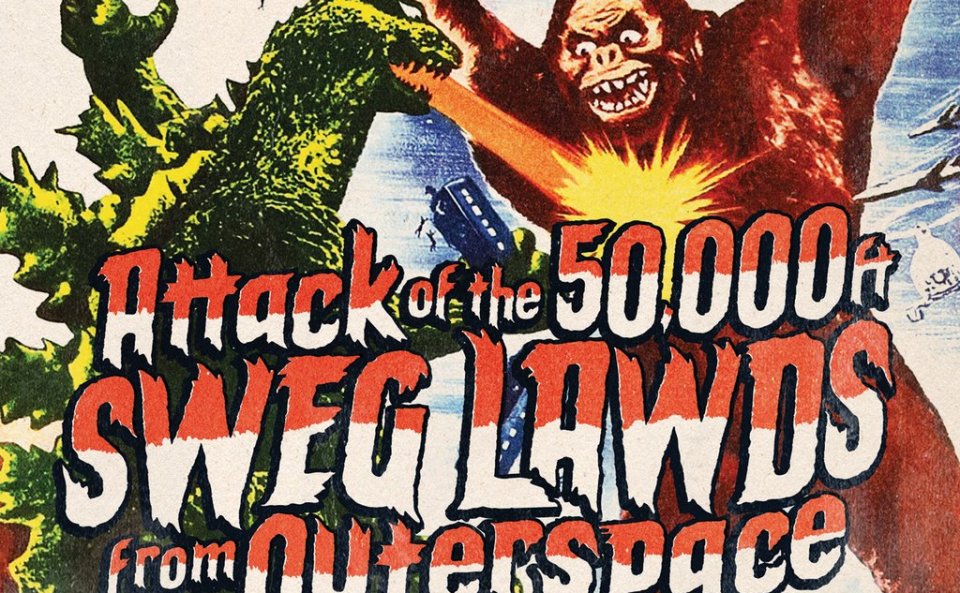 It wasn’t long in the making but it was two or three years of waiting on this latest Blah Records release, made in a Blackburn kitchen by Lee Scott and Black Josh on top of Sam Zircon’s beats.

The simply named album is packed with the sort of thing Blah is known for, with hard-hitting beats laced by intelligently dumb, funny and poignant lyrics coming from both the label’s head honcho and the younger cult member, Black Josh. The final track on this was the first to be released, as the duo warn you about the perils of ‘Social Media’ – slapping you through your Snapchat selfie cam whilst doing so. Visuals for this track announced the release of the full project which drops tomorrow, but we’re lucky enough to have heard the EP in full already.

It plays like the eery atmospheric swamp rap that we’ve come to expect from Zircon and Blah, as ‘Coool Like Dat’ follows the intro with some of the most head-shaking lyrics on the whole thing. Lee tells us that he ‘pours Henny in a whale’s blowhole’ after Josh had boasted about having a foursome with himself and the Olsen Twins in the previous verse. There’s something about the way projects such as these come together that seems like those stepping up to the mic are trying to get a laugh out of the rest of those in the studio, or in this case in the kitchen.

Speaking of which, ‘Blackburn’s Biggie,’ Bill Shakes enters the room for a more than welcome verse on track 4, ‘Sw£g Level 9000.’ With the recently released video setting up the kitchen scene nicely, filmed at the time of recording, you get a temporary pass into the Blah Mansion for the length of this EP highlight.

Shakes touches the mic like he knows how long you’ve been waiting for that thick accent to say something nuts, and he doesn’t disappoint. Ending his verse by telling us he’ll ‘slap Batman’s mask off,’ Bill Shakes brings that Brick Pelican, Children of the Damned steeze to this future Blah classic.

Tracks like ‘Cult Ho£gun’ give listeners those niche references that keep many religiously listening to this realm of British hip-hop, with Lee and Josh hitting you with countless similes and metaphors from the world of wrestling. An ode to the times when WWE was called WWF, the likes of Stone Cold (Sleaze Austin), Chris Jericho and others get a shout out, whilst Leezus telling us his ‘bitch is the baddest like Trish Stratus’ particularly rings bells with this reviewer.

The first time one caught sight of Trish’s blonde hair and unrealistic breasts was a key point in the lives of many young boys, just as this first release of 2018 is a key point for Blah. With new COTD, Salar, Sniff and surely more to come, expect more super sweggy rap releases from Blah Records as the year goes on.

This one is available to pre-order on vinyl and cassette, and to download via Blah Records, obviously.

It’s 5pm somewhere... but it’s 10am in London and we’re live on the capital’s finest @balamii for the next hour. Start your Friday on the right foot and tune in 📻 This month we’re on the phone with @misoextra, in anticipation of our @greatescapefest FIRST FIFTY show in London next month. Tickets for that are in the bio. 🍻
Postcard from spring ‘21, @1kayowa by @asherpenney, ISSUE SEVEN.
ISSUE EIGHT COMMEMORATIVE T-SHIRTS☕️ AVAILABLE NOW ☕️ OFFIEMAG.BIGCARTEL.COM ☕️
‘When we combine, it’s a kin of zeniths. You’re not gonna understand the lingo right now, but when you do, it’ll be mad.’
If you need new tunes, you know where to find em. The updated list is on Spotify, swipe for a preview of what’s new... ➡️
#TBT @blackjoshmcr, in full @sportsbanger puffa during London Fashion Week ‘19, captured by @asherpenney for Offie Mag.
Okay so here’s the deal. @mfabrighton have asked us to run some music at @patternsbtn this Thursday night. All funk, soul, disco, plus whatever @brickcellphone and @gregstanley could find in the £3 crates at Rarekind Records.
The rumours are true, @mikelikesrap is hitting the seaside and it ain’t one to be missed. Come and get inspired by the young and prolific New York artist at work, in the Gothic surroundings of @rialtotheatre.
@MIKELIKESRAP, DECEMBER 💨
‘This new project is who I am, there are no secrets.’
PUT YOUR MAG IN A BAG.
#TBT: @LAVALARUE AT @GREATESCAPEFEST, OFFIE MAG ISSUE THREE.
‘I don’t like things to be perfect, I don’t want to record my vocals a million times and forget how it sounded the first time I imagined it.’
OFFIE MAG RADIO TONIGHT FROM 9PM ON @PLATFORMBRADIO FEATURING AN INTERVIEW WITH @PINKSHABAB 🎸
GREAT JUMPER, EVEN BETTER MUSICIAN. @PUMABLUE, OFFIE MAG ISSUE SIX 🍷
OFFIE MAG RADIO ON @BALAMII 10AM TIL 11AM ☕️
#TBT @ABOVEGROUND, OFFIE MAG ISSUE ONE, 2018 📷
A BURGER RESTAURANT FREQUENTED BY BIG BROTHER 7 WINNER PETE BENNETT.
A TWO-MAN PRODUCER’S FOCUS GROUP WITH @KABUTOBEATS AND @SUSTRAPPERAZZI_...
'Warm. Welcoming. Easy on the eye. Yep, those custard tarts really are exceptional.